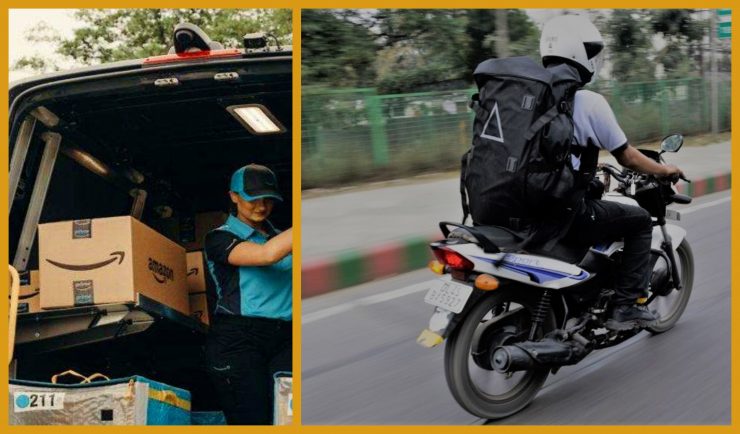 As far as the social and financial hierarchy goes, the delivery boy – or delivery partner, as online businesses like to call him – often occupies a higher rung than your maid, guard, gardener or construction worker. If he is working with some of the bigger e-commerce companies or a food delivery start-up, he enjoys steady income, good job mobility, generally has his own personal transport and is entitled for overtime and bonus. He is critical to the success of many companies because he is responsible for the last mile of the delivery chain, and is also the only person the customer interacts generally interacts with when the latter orders anything online or over phone.

When Prime Minister Narendra Modi, in another of his 8 PM addresses, announced a 21 day lock down starting in four hours or at the stroke of midnight – this critical link almost stopped functioning because as far as the policemen tasked with enforcing the lock down was concerned, the delivery boy was just another person trying to break the curfew.

On 24th night, the PM’s speech started when most physical grocers were about to close shop. The speech created a mad rush at many of these shops, leading to panic buying and huge crowds, but it was obviously not enough to meet the full demand of households who had simply not anticipated such a long lockdown at 4 hours notice.

On 25th morning, a number of big physical retailers – from Big Bazaar to Spencers – had advertised phone numbers that a customer could call for orders that would then be home delivered given that people not working in essential services were supposed to stay at home and not break the curfew. But when customers tried those numbers, they found that either those numbers were not working or not picked up or constantly busy. Customers who tried to order online from Amazon, Flipkart, Big Basket or one of the physical retailers for grocery supplies also found that their orders were either getting cancelled or put on hold.

Suddenly you had a situation where customers could not go out to shop because of the lock down rules and nor were they able to get anything home delivered. In many localities, even the friendly neighbourhood grocery shop was not of much help. First, because he was not getting supplies and had run out of stock of many things. And two, because he was too undeerstaffed to deliver anything. (The shortage of stock will be the subject of the next installment of Lock Down Diaries, but let us focus on the last mile delivery in this one).

The problem had cropped up because the Union Home Ministry guidelines were broad and did not spell out many details, leaving a lot of discretion to states, to districts and even city administrations on how the lock down would be implemented. And even if the senior officials of state, district or town administrations were clear about the guidelines, it did not filter down to the policemen who were actually enforcing the lock down. In the first two days, the policemen on the streets had more or less complete discretion on who they should let through and what they should stop.

This created two separate bottlenecks. First, with states going into full lock down mode and barricading their borders from neighbours, the stock replenishment part of grocery stores came to a halt. Trucks were halted at state borders and told to cool their heels for 21 days or until clarity emerged on whether they should be allowed to move on or not. Normalcy here has still not been restored though some progress has been made after the initial chaos.

More importantly, when delivery partners or boys tried to venture out from their homes, they were often beaten up and sent packing by the policemen enforcing the lockdown.  The police were suspicious of even doctors going to hospitals once the lock down was enforced (See Lock Down Diaries2: Medical and Non-Medical Problems), but with delivery boys, they were absolutely brutal.

Physical and online retailers found that their delivery boys just could not report for work or go out with goods. There had not been any coordination meetings between the centre and state administrations on the mechanism and identity proof or curfew passes that would allow delivery boys to move around freely. Thus even if a big retailer – either physical or online – had actual stocks that could be delivered to a customer, there was simply no way of doing so.

The big retailers were working hard and holding constant discussions with authorities to clear the logjam. But the kind of problems that were cropping up simply boggled the mind. Some of them are trying to pool resources and keep aside their traditional rivalry but all solutions have not been worked out yet.

First there was no definition of essential goods for retailers. Some things were simple and agreed upon by all – for example basic food staples etc. But arguments cropped up on classification of other goods. Was Baby Food an essential supply? Were diapers an essential good? What about things that were not groceries but aids for senior citizens – like spectacles or walking sticks? Could academic books or stationery items be classified as essential items given that they would be required for children and home workers during the period of the lock down? One online player says that in some localities, overzealous policemen would open packages to see that no non-essential good was being carried and often arbitrarily taking decisions on whether to let things move forward or be sent back.

At the time of writing this article, full clarity has still not emerged on all issues regarding what is an essential good and what is not and different states are taking different stands.

But the other big problem that has cropped up is on how to ensure that delivery partners or delivery boys would move around. It took four or five days for several state and district administrations to work out rules. Some came up with online curfew passes that could be downloaded and signed by the organisation that would in turn allow the delivery boys carrying them to move past police barricades. The problem here is that the delivery boy would first need to reach his office to get the form that would allow him to do his job. And he was often not allowed to reach his office without a pass in the first case. A classic Catch 22.

The other problem was that many states, understandably suspicious of giving an open pass to organisations, decided to put in checks and measures, including giving out passes that would carry the names and pictures of the delivery boys. But this has backfired in many cases because many delivery boys in bigger cities were migrants – and had now decided to go back home. So if a shop had got a pass made for a particular person, it would need to go through the entire process again in case the delivery boy had quit or just gone absent. Retailers also complain that they have so far been given a fraction of the passes they had applied for.

A lot of retailers are also finding that too many delivery boys have just decided to quit or take a temporary break – either because of the virus scare or because they were beaten up by the policemen in initial days. Even offering higher salaries and bonuses is not getting them to report for work.

Meanwhile, while the supply systems of replenishment of stocks is limping back to normal, it is still not fully ready. And many neighbourhood grocers are not functioning at full steam and cannot make up for the lack of delivery boys of big shops either.

Even with big, standalone grocery shops – which are not part of any chain – the police often create hurdles. One big shop which deals with both dry groceries as well as mutton and fish and has a hefty business of supplying cold chains says that the policemen who are enforcing the lock down in the market have no real idea or clear instructions on whether fish and mutton can be stocked and supplied or not. So they come around every day to poke around his shop and see what he is selling or supplying customers who are within walking distance of his shop.

Vegetable shops and stalls that have ostensibly been allowed to keep operating also say they are finding it difficult to both move around to buy fresh produce and sell easily because of police presence. For some of them, bribery has become essential to keep their shops open. Small grocers who would buy stuff at cash-and-carry stores say they cannot even reach these outlets any more to replenish their stocks.

Everyone though is confident that these are initial hiccups and things would get clearer in the next few days. And that is what grocers and customers are looking forward to.